Over 10 years ago I worked at company that prided itself on the fact that it was a meritocracy, and even at the time it seemed at best aspirational and at worst cringeworthy. Everyone knew that it wasn't always true, and even companies with the best of intentions know it's not completely true. Since that time I've travelled, lived in different countries, and worked for a large number of companies. At some point along the way I've come to appreciate that the reason why meritocracy was a lie was much more troublesome than I'd originally realised.

The lack of objectivity

In many organizations there is an unfortunate pattern where performance is rewarded via a promotion in the corporate hierarchy. We've likely all seen the negative side-effects of that: people promoted into management that have no desire to be good managers but crave the recognition, or feeling overlooked and undervalued on a project given the amount of effort we put in. When the credit goes to someone who played a lesser role it always stings and speaking up against it seems petty. The thing is there's no objective way to measure the contribution of an individual within a team, but we try any way. The person who reaps the most reward is usually the one who talks the most to the right people. And if you're busy delivering the project chances are you're too busy to be telling everyone how busy you are being busy. Kate Matsudaira gave a great keynote at FutureStack earlier this year which touched on many of the same topics but in the context of how to be a better leader and manager.

We can't isolate our own biases. Are we rewarding this person because they did a great job? Because they put an amazing amount of effort into the work? I mean they even ended up being late for a really important football match that their daughter was playing in, so their personal sacrifices need to be considered. Would you have even known that if you weren't such close personal friends and had lunch on the weekend? Do you know what every other employee was meant to be doing on a random Thursday night?

It's a such a web of complexity. So many subtle variables. So many things to measure, so many things you can't. It's not to say you shouldn't try, you just can't ever say you've got the whole picture. It's a selective and largely subjective measure of contribution and any action you take to give a person what they deserve, what they merit, is skewed by that sampling bias.

But that's only the most trivial of the reasons why this approach is broken.

The lack of historical context

In my experience our advancement in life continues as we get older. Each subsequent advance building on the previous one as we continue striving to move onward and upward. Our current position of advancement at any point in time plays a large part on how old we are and how long we've been doing whatever we've been doing. And our measure of what we deserve, our merit, is the accumulation of all that advancement and experience. It might follow a linear path like this: 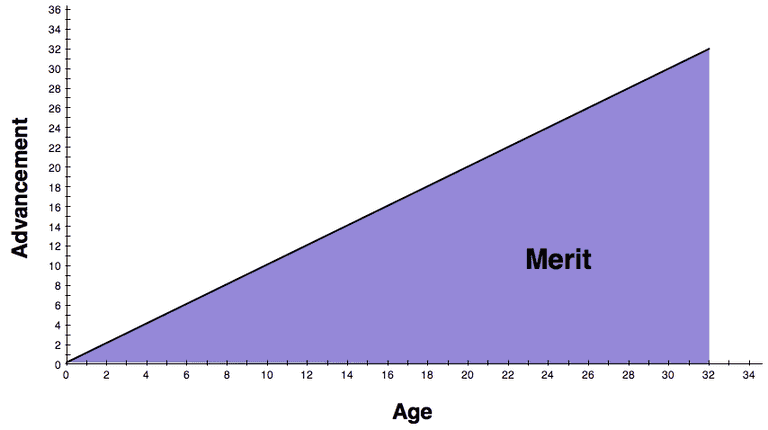 So our merit can be measured simply by measuring the area under the line at any point in time. Easy! If only it were. You might intuitively sense that this steady linear progression isn't grounded in reality. So lets adjust it based on my own naive perception of my own experience: 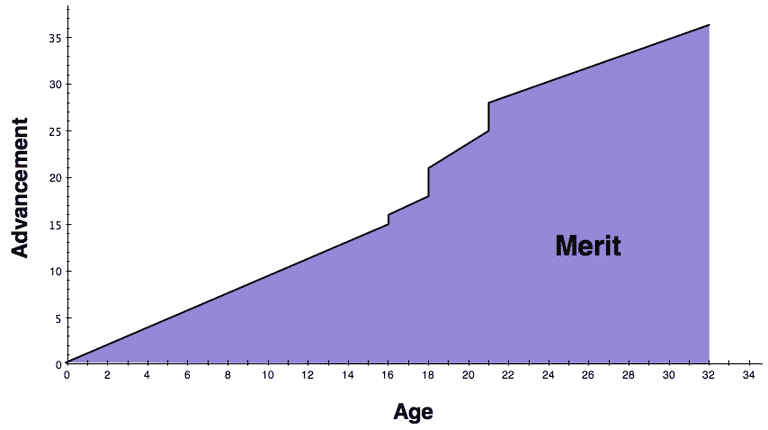 There are long established cultural and societal expectations on an individual based on nothing more than their age. Arbitrary numbers which suddenly mean you're no longer an adolescent, you can be trusted to vote, you're allowed to drink. Literally overnight society has deemed you deserve more, because you lived another day and completed another lap of the sun. But there's also significant things I've undertaken that have contributed to where I am today. I first started selling my own software when I was 12, I switched to .Net when it came out in 2002, I picked up ruby around the time Rails came out. These all proved to be pretty significant events for me: 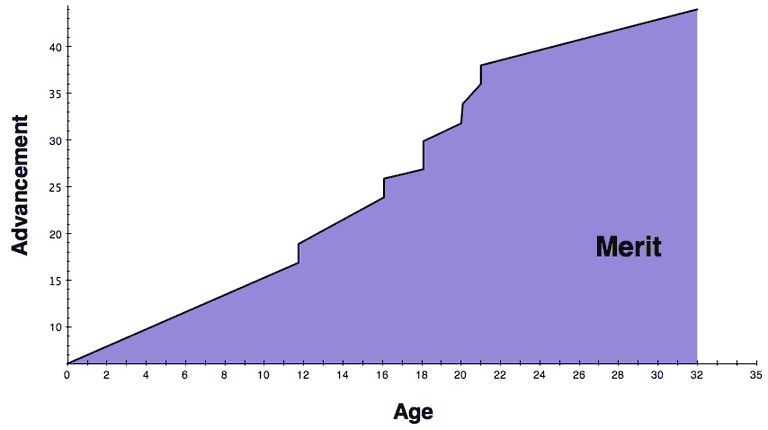 How on earth was I able to start selling software at 12? I was privileged enough to go to a good school, which in turn was fortunate enough to have a computer in every class room (a big thing at that time). But I was also fortunate enough to have parents that ran a shop selling PCs, and I got my first computer when I was only 2. Because my father was an electrician and was experimenting with them himself pretty early on. Being a qualified electrician meant that the Australian government paid most of his relocation costs to move to Melbourne in the 1970's because of a shortage of skilled labour at the time. And he'd been able to become an electrician because he had a large family that placed a high value on a good education, and we're able to help put a roof over his head while he studied. There's a whole series of events, coincidence, good timing, or just dumb luck that happened prior to any deliberate focussed effort on my part or before I was even born that have contributed in a significant way to where I am today. What if my dad had never become an electrician? What if he'd never moved to Australia? What if my parents weren't able to afford a computer for me at such a young age? What if he'd never opened a PC store?

And then there's the ugly truths about this privilege that are much harder to admit. What are the chances the Australian government would have paid for my dad's immigration in the 70's if he wasn't Irish? Would my mother have received the same standard of obstetric care if she was an indigenous Australian? What would my own health in my childhood been like if that were the case? What kind of schools would I have gone to if my parents weren't both White Catholics? Did my dad joining the Freemasons mean that we had a more supportive network than other new immigrants to a country?

All of these things fed into who I am and what I've achieved in varying amounts. So my chart actually looks more like this: 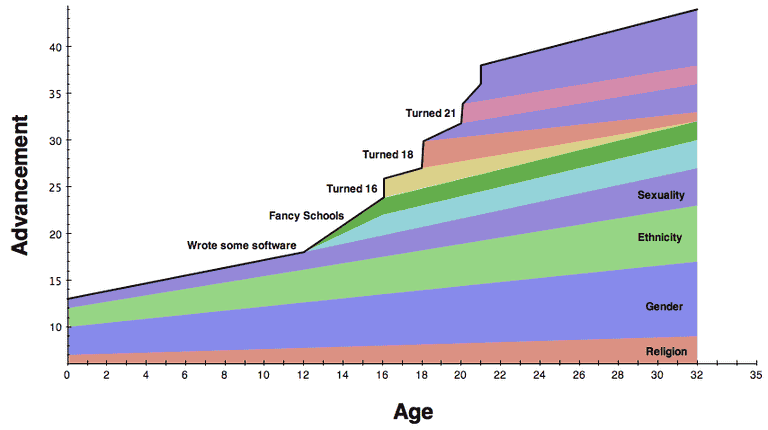 And here we can visualize one of the problems with meritocracy. Those with good intentions think they're only evaluating someone based on their most recent work:

But it overlooks that even a single achievement is built upon a foundation of previous achievements, and a lot of privilege. You think you're rewarding one small thing, but a different thing played a much larger role in the outcome. I might commit most of my waking hours to exercising and improving my craft and over time that too plays a significant role in my advancement. But being a straight white male has had 32 years of compounding interest applied to it: 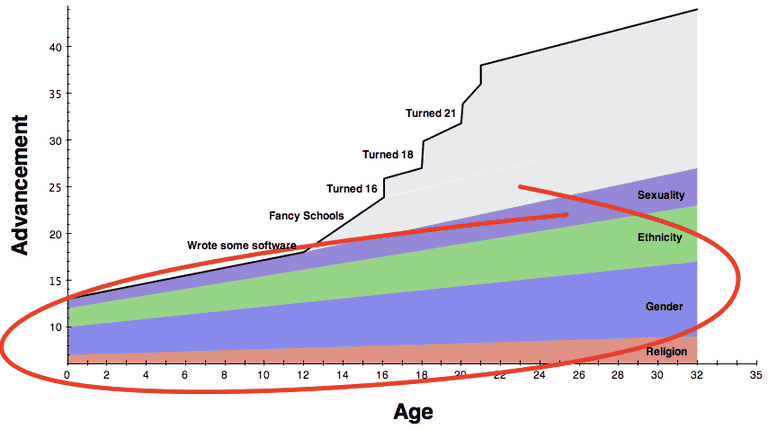 I hope that on a day-to-day basis it plays an increasingly small part in how or why I advance, but it's undeniable that it's a pretty major reason for why I am where I am today. Maybe even collectively the largest reason.

So what's the alternative?

I can't change who I am, but I can at least be cognizant of who I am. And I can be mindful of the words I use when talking about my own self-worth and the worth of others. It really shouldn't be a surprise privileged groups of people talking about "what they deserve" (i.e., meritocracy) causes other groups to get incredibly offended. If you want to overlook the multi-generational privileges bestowed upon you by the constructs of our society that's fine, but you deserve to be corrected.

Besides, you wouldn't give someone a medal at the Olympics if they had a head-start.

Hi, I'm Glenn! 👋 I'm currently Director of Product @ HashiCorp, and we're hiring! If you'd like to come and work with me and help make Terraform Cloud even more amazing we have multiple positions opening in Product Management, Design, and Engineering & Engineering Management across a range of levels (i.e., junior through to senior). Please send in an application ASAP so we can get in touch.
← Nobody cares what tools you&nbsp;useOn hiring →